‘​…your challenge is to share button starter kit for e-learning. Include as many different button types and styles as you’d expect to use in a typical course.‘ is how David Anderson, Articulate community manager, worded challenge number 133.

If you look at a button, you will notice it has two distinct parts: enclosure and text and/or icon. I decided to customise these two parts, and create a unique set of buttons.

Typically, the enclosures have a single complete shape. So one gets to see a complete circle, or a complete rectangle etc. I thought of creating only a partial enclosure. By partial enclosure, I mean that if the button is rectangular in shape, then only 2 lines – one vertical and one horizontal – will be visible to the viewer.
When it came to the text and the icon, I decided against showing both at the same time. Rather, I thought that only the icon should be visible, and the text should be displayed upon hovering. This thinking gave me two advantages. Firstly, I could create concise buttons. Secondly, people usually expect something to happen when they hover over a button; therefore, if the text is displayed on hover, then my button will fulfil the public’s general expectations.

For the icons, I decided to include symbols from the fonts belonging to the dingbat family.

Accordingly, I chose the pointing fingers as icons for my ‘Next’ and ‘Back’ icons. However, when it came to creating icons for other buttons such as Home, Menu etc., I was in two minds. 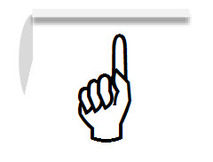 First Attempt at Creating an Icon for Home Button

​I did not know whether to use the different hand formations as my icons or choose some other symbols. I first tried the hand formations. For example, an upward pointing finger became my home icon.  Now I believe that an icon should convey meaning, or rather provide hints, instantly without putting much strain on the viewer. My home icon was not doing this. A finger pointing up was hinting towards a direction rather than a home page. I, therefore, ditched using hand formations as symbols and made use of other symbols.
​The only time the hand formations appear as icons are for the Submit and the Notes buttons. I used the upwards pointing finger as an icon for the Submit button. The reason was that when you submit something in a virtual world, you are actually giving it to someone who is a kind of higher authority. In the real world too, when you submit something, say your answer paper, there is this brief upward action that your hand performs.
​When it came down to creating the enclosure for my buttons, I will confess that I tried combining different shapes. After trial and error, I settled for a line and an arc. A dash of grey colour and a shadow effect completed the enclosure.

I enjoyed this challenge as it gave me an opportunity to try my hands at creating customised buttons. Also, I became more familiar with dingbat fonts after this challenge.
​
Full Disclosure:  Initially, I had just made the icons. However, my buttons were lacking the feel and look of a button. That’s when I realised that an enclosure coupled with a text/icon makes a button.
View My Entries
Download Storyline File